“In a field of genre fiction overflowing with mediocrity and stale ideas—published by large and small press alike—Luke Smitherd stands out as a truly new and original voice.” –AintItCoolNews.com 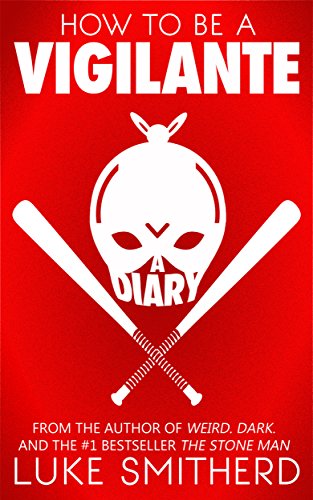 In the late 1990s, a laptop was found at a service station just outside of Manchester. It contained a digital journal entitled ‘TO THE FINDER: OPEN NOW TO CHANGE YOUR LIFE!’ Now, for the first time, that infamous diary is being published in its entirety.

It’s 1998. The internet age is still in its infancy. Google has just been founded. Eighteen-year-old supermarket shelf-stacker Nigel Carmelite has decided that he’s going to become a vigilante.

There are a few problems: how is he going to even find crime to fight on the streets of Derbyshire? How will he create a superhero costume—and an arsenal of crime-fighting weaponry—on a shoestring budget? And will his history of blackouts and crippling social inadequacy affect his chances?
This is Nigel’s account of his journey; part diary, part deluded self-help manual, tragically comic and slowly descending into what is arguably Luke Smitherd’s darkest and most violent novel.

What do you believe in? And more importantly… should you?

How to be a Vigilante: A Diary
Released 14th September 2016

Get your copy now on Amazon Kindle as well as Audible.co.uk and Audible.com

Luke Smitherd is the author of the international bestselling novel The Stone Man. He was born in the United Kingdom and has made his home town of Coventry the setting for most of his work. He attended Coventry University, graduating with a BA in Theatre. Prior to being a full-time novelist, he held diverse jobs ranging from copywriting to singing/songwriting. For a while, he considered becoming a professional darts player, but decided writing was his true calling. He hasn’t looked back since.

His first novel, The Physics of the Dead, was published in 2011. He then began the The Black Room series, which later turned into the completed novel, In the Darkness, That’s Where I’ll Know You. During that same time period, he wrote and published The Stone Man, which truly announced his arrival as an author. The Stone Man is a bestselling novel in both the United Kingdom and the United States and has sold over 100,000 copies. Its success allowed Luke to become a full-time writer. He can’t quite believe the remarkable turn his life has taken, but he is very grateful and happy that it has.

He entered the world of audiobooks in 2015 when he collaborated with British actor, Matt Addis, to produce the audio version of The Stone Man. This book went on to be shortlisted in the final 12 for Audible Audiobook of the Year 2015 amongst such writing superstars as Stephen King and JK Rowling. Luke has narrated all of his other audiobooks.

Luke’s relationship with his readers is very important to him. He knows their loyalty and excitement about his work allow him to continue to do what he loves. He enjoys talking to fans on Facebook and Twitter, and he is famous for the “Afterwords” to his books, where he talks about how the story came about, as well as sharing personal details about what was going on in his life as he wrote the book. His “Afterwords” are favourites of his readers. He is grateful to all his fans for their support and promises if they keep on reading, he’ll keep on writing.